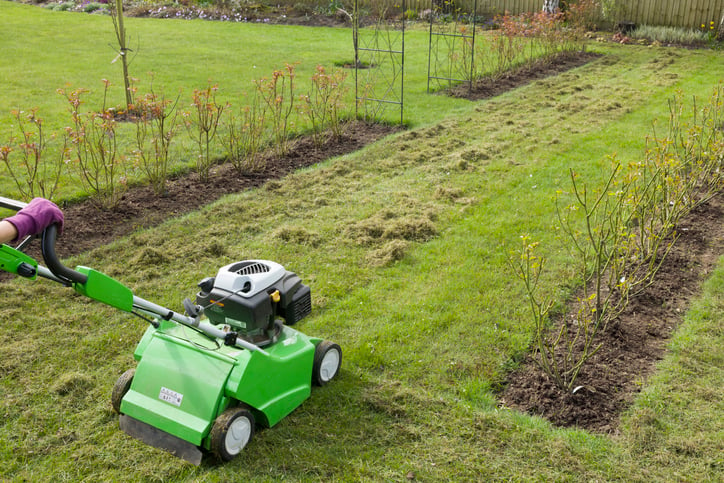 What Are The Pros and Cons Of Dethatching Lawn?

The pros and cons of dethatching. It’s a topic that is debated quite frequently amongst homeowners. And there are compelling arguments on both sides.

You may not even notice thatch on your grass until one day when you’re mowing your lawn. You may see the buildup, try rolling the lawn mower over it, and then wonder “What do I do now?”

But here in Michigan, thatch build can become a problem because of the cool-season grasses we typically see in yards. That makes dethatching a typical addition to any lawn care plan.

So, whether you have a small lawn with oversize patches or a big yard with little patches, let’s go over the pros and cons of dethatching.

The buildup of dead and decomposing grass stems, leaves, and roots combined with live plant roots is known as thatch. Grass clippings don’t contribute to the formation of thatch because they disintegrate quickly. In fact, they should be returned to the turf as soon as possible. It’s good for your grass.

But when thatch gets to be over an inch thick, it might block water and airflow. This can cause your turf to weaken over time.

There are a variety of microorganisms (and other organic matter) that live in the thatch layer and are responsible for its breakdown. However, when thatch is created at a quicker rate than it is decomposed, a buildup starts.

Kentucky bluegrass, for example, is a very common cool-season grass in Michigan. It accumulates thatch more quickly than other grasses.

Why You Should Dethatch

Excessive thatch can be an issue when thatch production is higher and breakdown is lower. Too much thatch prevents water, air, fertilizers, and insecticides from reaching the soil. It also promotes disease, attracts insects and other pests, and lowers cold and heat tolerance.

Cut a pie-shaped wedge out of the turf and measure the thickness of the thatch layer to see if a stand has too much thatch. Take steps to reduce thatch if it is more than a half-inch thick.

If you’re going to dethatch an area of your lawn, try some compaction-relieving practices to break it up. Hand-raking will remove thatch from small turf patches. A dethatching rake works best.

To remove thatch in bigger areas you may need a mower-like machine called a power rake. It comes with vertical blades or tines that cut and remove organic material from turf, which provides habitats for creatures that break down thatch organically.

Because dethatching thins turf stands, it should only be done during cool, damp months when the turf can recover fast. Cool-season grasses should be dethatched in the early fall (early September in zone 5-6 on the Plant Hardiness Map) when the grass is at its healthiest.

Why You Shouldn’t Dethatch

Some thatch is beneficial to grass because it slows water loss. Thatch insulates your lawn and protects it from temperature fluctuations. It also promotes tolerance to foot activity by keeping the soil cool.

Thatch is present in healthy grass. Only when the thatch layer becomes too thick and keeps water and air from reaching the roots of your grass do you have a problem.

If you’re experiencing thatch buildup in your yard, you can review the pros and cons of dethatching and try to do it yourself. Or you can call the experts at Lush Lawn.

We can help dethatch the areas of your lawn that need it or help you put together a plan (that involves something like core aeration) to help eliminate your thatch problem altogether.

What Are The Pros and Cons Of Dethatching Lawn?
Billbug Or Chinch Bug Damage: How To Get Your Lawn Thriving Again
How To Keep Grub Worms Out Of Your Yard
Best Lawn Insect Killer To Keep Your Grass From Dying